SGCI (S. gregaria chymotrypsin inhibitor) and SGTI (S. gregaria trypsin inhibitor) are small, 35-residue peptides isolated from the desert locust, Schistocerca gregaria, with intriguing taxon specificity: SGTI is specific for arthropod proteases while SGCI is an excellent inhibitor on both mammalian and arthropodal enzymes. Both proteins are highly flexible on the ps-ns time scale with S2 order parameter values around 0.7. The distribution of residues for which a chemical exchange Rex term should be considered is strikingly different in SGCI and SGTI. Together with H-D exchange studies, this indicates that the internal dynamics of the two closely related molecules differ. We suggested that the dynamic properties of these inhibitors is one of the factors that determine their specificity. 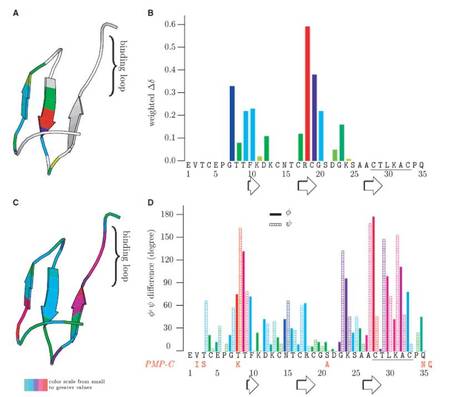 Conformational ensembles reflecting the fast time-scale dynamics of these canonical inhibitors include structures highly similar to the enzyme-bound state. Thus, rather than being classic examples of the rigid lock-and-key mechanism as widely accepted, these inhibitors rather exhibit nanosecond-timescale conformer selection. Thus, fast timescale dynamics enables the association rate to be solely diffusion-controlled just like in the rigid-body model.
Complexation of SGCI with bovine chymotrypsin was also investigated by NMR spectroscopy. Comparison of the free and complexed inhibitor structures revealed that most, but not all, of the observed chemical shift changes can be attributed to minor structural transitions. We suggested that the classical 'scaffold + binding loop' model of canonical inhibitors might not be fully valid for the inhibitor family studied. In our view, this feature allows for the emergence of both taxon-specific and nontaxon-specific inhibitors in this group of small proteins besides the dynamical properties.