Characterization of intrinsically disordered proteins and their interactions

Calpastatin is a functionally disordered inhibitor of the intracellular calcium-regulated cysteine protease calpain. Using chemical shift mapping and relaxation studies we have shown that the functional segments of calpastatin exhibit characteristic local structural preferences with reduced mobility. Calpain binding is tripartite with flexible linkers between the contact point allowing high speed and specificity of target binding.

Summary of NMR analysis of the intrinsic flexibility of calpastatin 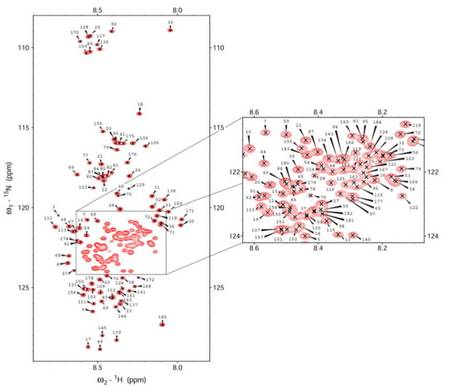 Thymosine β4 (Tβ4) is a 43 amino acid long intrinsically disordered protein (IDP), and its 4 described partners, PINCH, ILK, and stabilin-2, and G-actin, are structurally unrelated (the CTD of stabilin-2 is actually fully disordered), it occurred to us that this system might be ideal to characterize the structural adaptability and ensuing moonlighting functions of IDPs using NMR along with several other techniques.
A fragment of myosin Va (myo5a), which is intrinsically disordered as well, was investigated by NMR spectroscopy, X-ray crystallography, and MD simulations. In the free form, the dynein light chain (DLC2) binding region, located in an intrinsically disordered domain of the myo5a tail, has a nascent helical character. The motif becomes structured and folds into a β-strand upon binding to DLC2 showing a disorder-to-order transition. Interestingly, while the core motif shows a similar interaction pattern in the binding groove as seen in other complexes, the flanking residues make several additional contacts, thereby lengthening the binding motif. The N-terminal extension folds back and partially blocks the free edge of the β-sheet formed by the binding motif itself.
The fragment from binding region of nonmuscle-myosin IIA (MPT) to S100A4 is also intrinsically disordered which has a nascent helicity shown by SSP (secondary structure propensity) values. This nascent helicity was evidenced by relaxation measurements used for reduced spectral density analysis too. In this case the disorder-to-order transition of the entire fragment results in a substantial helix when interacting with S100A4 as shown by NMR and X-ray structures.
We characterized several other intrinsically disordered protein regions, e.g. TPPP/p25, RSK1 protein fragments and DF31.