Towards the understanding of regulation of acylpeptide hydrolases

Acylpeptide hydrolases (acylaminoacyl peptidase, AAP, APH) are members of the prolyl oligopeptidase family. The substrate size is restricted by the two-domain structure of these serine proteases: folded proteins larger than oligopeptides are protected from cleaving. It is an upstream regulator of the proteasome, it can degrade multimeric forms of the amyloid-peptides also linked to diverse cancer types, considered as a potential tumor suppressor.

Our crystallographic studies explore the active site of the model enzyme A. pernix K1 APH (ApAPH), clarifying the roles of the active site Asp, and the structural characteristics of the oxyanion site specific to APHs within the family. We also solved the structure of P. horikoshii APH (PhAPH), which, in contrast to the dimeric ApAPH, functions as a hexamer. In collaboration with Chinoin Pharmaceuticals we explored the substrate binding subsites of prolyl oligopeptidase (PDB codes:2hu5, 2hu7, 2hu8, 2qr5, e3q7, e3q8, e3q9, 4hxe, 4hxf, 4hxg).

Curiously, oligopeptidases are different oligomers: some of them are monomeric, while others have dimeric, tetrameric or hexameric form. Our structural studies revealed that the oligomeric state is related to the size-selection mechanism and to the prevention of amiloidogenesis. Analysis of the known structures of the family shows, that the beta edge of their hydrolase domain is sticky and thus amyloidogenic. This beta sheets are covered by the N-terminal helical segment in the monomeric prolyl-oligopeptidase, or shielded by the neighboring units within the multimeric structure (e.g. dipeptidyl peptidase IV, ApAAP or PhAAP).

A novel crystal form of ApAAP containing a closed and an open conformation of the enzyme revealed the possible mechanism of substrate size selection and enzyme activity by decoupling substrate binding and hydrolysis steps. We found that the 1) open form is functionally disabled, but it allows larger substrates (oligopeptides) to approach the active site. 2) The closed form bears a functionally active catalytic triad configuration, but its only access to the large cavity containing the active site is the narrow pore of the propeller domain (PDB codes:3o4g, 3o4h, 3o4i, 3o4j, 4re5, 4re6). 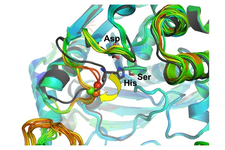 The above conformation selection mechanism could operate in other oligopeptidases of clamshell-like opening. In contrast, PhAAP and some other oligopeptidases form rigid oligomers of larger side-entrances between the two domains. Here, the substrate size selectivity is ensured by a gating system of cavity/cavities and channel(s) within the multimeric structure of the oligopeptidase itself.