S100 proteins family and their complexes with many interactions partners are mostly involved in tumors and metastasis. Our NMR spectroscopic studies are targeted towards the S100A4 and S100B members. The asymmetric complex of Ca2+-loaded S100A4, with non-muscle myosin 2A strongly promotes metastasis, has high stability and highly increased Ca2+-affinity. Backbone dynamics reveals slow time-scale local motions in the H1 helices of the homodimeric S100A4. This motion diminishes in the complexed form and can be one reason of the increased dimer stability. The different mobility in the Ca2+-coordinating EF-hand sites indicate that they “communicate” by an allosteric mechanism operating through changes in protein dynamics that must be responsible for the elevated Ca2+-affinity. 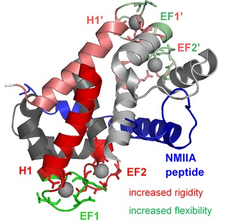 We further investigated the filaments formed upon the assembly of non-muscle myosin 2 (NM2) paralogs. We evidenced that the equilibrium between filaments and single molecules can be controlled via S100 protein interactions and phosphorylation at the C-terminal end of the heavy chains. Specifically, S100 binding preferentially disassemble NM2A, while tail phosphorylation disassemble NM2B. These two distinct mechanisms are likely to contribute to the temporal and spatial sorting of the two NM2 paralogs within heterotypic filaments and they offer the potential for diverse regulatory inputs modulating filament disassembly in cells.

Ezrin, a member of the ERM (Ezrin/Radixin/Moesin) protein family shows similar pathological properties as the S100 proteins. We showed that S100A4 binds to both the N-terminal and the unstructured C-terminal ERM domain of ezrin of micromolar affinity. Using NMR spectroscopy, we characterized the complex of S100A4 with the C-terminal actin binding domain.

We showed that the activation of the entire C-terminal random coil of the homodimer S100A4 protein can play a role in mediating interaction with selected partner proteins. Pulsed field gradient NMR measurements show that the hydrodynamic radius in the wild-type protein increases upon Ca2+ binding while the radius of the C-terminal tail truncated mutant does not change. This finding was strengthened by SAXS measurements and MD-simulation.

The S100B interaction with calcium/calmodulin-dependent protein kinase (CaMK)-type domain of Ribosomal S6 Kinase 1 (RSK1) can facilitate therapeutic targeting of melanomas, because S100B inhibits the first phosphorylation event on RSK1 in the MAPK pathway responsible for cell growth in malignant melanomas. Therefore, we investigated and characterized the structure of S100B-RSK1 by NMR spectroscopy, crystallography and SAXS. The synergy of these methods reveal that S100B forms a "fuzzy" complex with RSK1 peptide ligands.