Proteases of the complement system

MASP-2 is responsible for the first enzymatic event of the lectin pathway of the complement cascade - a major element of innate immunity. MASP-2 is a modular enzyme with restricted specificity. It is capable of autoactivation, moreover the proenzyme form shows catalytic activity on natural substrate. We solved the structure of the zymogen and activated forms of the enzyme. Comparison of the active structure with C1s the analogous enzyme of the classical pathway of complement reveals that nearly identical substrate specificities of C1s and MASP-2 are realized through different sets of enzyme-substrate interactions. The complement system plays crucial role in the innate immunity, being connected to the adaptive immune response too. Its action is based on regulated protease cascades, where proteases cleave and activate each other’s proenzyme forms in a strictly ordered manner. In cooperation with the Laboratory of Structural Biophysics of RCNS HAS and Directed Evolution Research Group of the Department of Biochemistry ELTE, our aim is to explore the structural bases of the function of various complement proteins.

C1-inhibitor is a major downregulator of inflammatory processes in blood, being the inhibitor of also C1r, C1s, MASP-1 and MASP-2. Based upon the structure of its serpin domain we suggest a novel ”sandwich mechanism” explaining the effect of polyanions, such as heparin on the inhibitory affinity of C1-inhibitor.

We studied structures of the early proteases of the classical and lectin pathways of complement activation using crystallographic methods in order to characterize their specificity and interactions at atomic level. The first enzymatic event of their cascades is the autoactivation of the first enzymes of the lectin and classical pathways – making these enzymes special because most serin proteases in the family are inactive in their proenzyme form. Based on the structure of C1r, the first enzyme of the classical pathway, we revisited the mechanism of C1r autoactivation. We suggest a “split-and-reassembly” mechanism, where a minor mechanic effect is enough to destabilize the head-to-tail dimer and initiate autoactivation. Comparison of the structures activated (cleaved) and proenzyme (single chain) forms of the catalytic regions of MASP-1 and MASP-2, the first enzymes of the lectin pathway helped to understand the structural conditions of autoactivation. Understanding the differences between the substrate specificities of these two enzymes was also aimed. Using highly specific inhibitors evolved using phage-display technique we solved the first enzyme-substrate complex-like structures of MASP-1 and MASP-2. The structures explored structural elements of sub-site specificities including an allosteric effect. 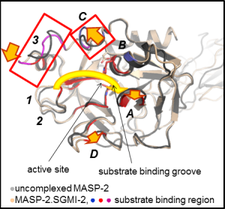 Changing of the substrate binding region upon binding of specific peptide inhibitors by MASP-1 and MASP-2.