NMR spectroscopy helps solving the structure of peptides and cyclopeptides as well, our selected molecules are potential drug candidates.
NGR peptides that recognize CD13 receptors in tumor neovasculature are of high interest, in particular due to their potential applications in drug targeting. We analysed the structure of novel thioether bond-linked cyclic NGR peptides. A significant correlation was found between chemostability and structural measures, such as NHGly−COAsn-sc distances. The sidechain orientation of Asn is a key determining factor; as chemostability increases once the position is turned away from HNGly. 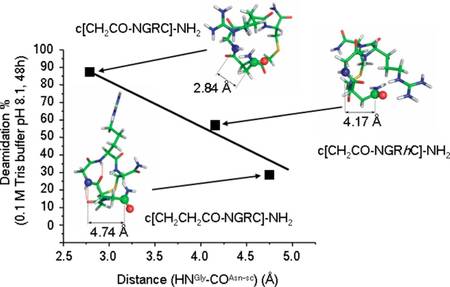 The direct antitumor activity of sea lamprey (Petromyzon marinus) gonadotropin-releasing hormone III (IGnRH-III) was described on several tumor cells. In order to find a correlation between the biological and structural features of modified IGnRH-III compounds, the conformation of lGnRH-III and its dimer derivatives was determined by ECD, VCD, FT-IR and 1H NMR spectroscopy.

The synthesis, in vitro evaluation and conformational study of several small‐size polypeptides acting as antibacterial agents were reported. In order to better understand their antibacterial activity, an exhaustive conformational analysis was performed, using both theoretical calculations, MD simulations and experimental measurements (CD). Some of these peptides constitute very interesting structures to be used as starting compounds for the design of new small‐size peptides possessing antibacterial activity.