Oxidative stress could initiate radical formation in proteins when, for example, the H-atom is abstracted from the Cα-carbon of an amino acid residue. C radicals are typically trigonal planar and thus achiral, regardless of whether they originate from a chiral or an achiral C-atom (e.g., C–H + •OH → C• + H2O). Electronic structure calculations show that such a radical remains achiral when formed from the achiral Gly, or the chiral but small Ala residues. However, when longer side-chain containing proteogenic amino acid residues are studied (e.g., Asn), they provide radicals of axis chirality, which in turn leads to atropisomerism observed for the first time for peptides. The two enantiomeric extended backbone structures, •βL and •βD, interconvert via a pair of enantiotopic reaction paths, monitored on a 4D Ramachandran surface, with two distinct transition states of very different Gibbs-free energies: 37.4 and 67.7 kJ/mol, respectively. 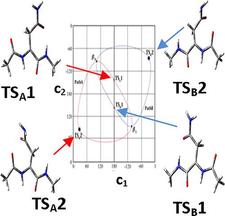